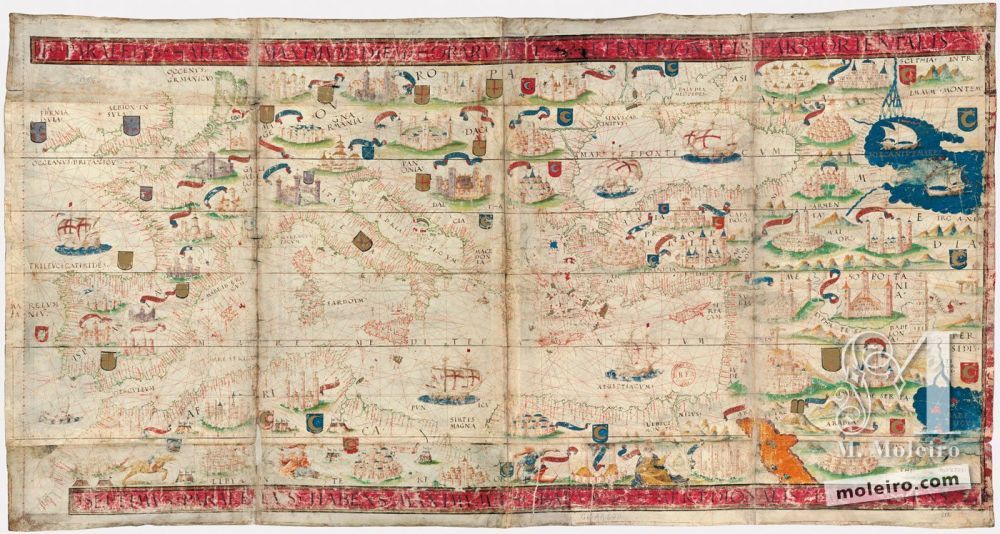 The chart of the Mediterranean region is clearly a copy of a portulan chart or sea-chart. This is demonstrated both by the inclusion of rhumb lines, which also appear on all the other regional charts, and the complete absence of place-names on the land, except for the names of the main regions, which are written in capitals. Besides the seaport cities, such as Lisbon, Seville, Bordeaux, Rome, Pisa, Cairo, etc., the few other cities shown are all river ports. The locations mentioned in Portugal are Caminha, Viana, Fão, Vila do Conde, Matosinhos, Porto, Cabedelo, Felgueira, Abeiro (Aveiro), Buarcos, the River Mondego, Paredes, Selir (Salir), the Berlengas, Cabo Carvoeiro, Atouguia , Maçãs, Cabo Roca, Lisboa, Almada, Cabo d’Espichel, Setúvel (Setúbal), Troia, Cabo S. Vicente, Lagos, Albufeira, Tavila (Tavira) and the Odiana (Guadiana), but no mention is made of Coimbra, Évora or Santarém. In contrast to the other charts, not only are the inland cities forgotten, but also the courses of the rivers are ignored, at least in Europe. Only the lower reaches of the Danube and the Dnieper, and one small section of the Don are shown, while the rest are reduced to vague images of the mouth.
Using the same practice from nautical cartography, detailed place-names are provided for locations on the west coast of the Caspian Sea, classically identified as Hyrcanius Mare (incorrect Latin for Hyrcanium Mare), even though these places were poorly known in Western Europe. The few place-names that can be identified are as follows: flumen Cur, the River Kur or Kura (the Corus, Cyrus, or Cyrnus from antiquity), whose mouth is at 39º 28' N, 49º 19' E; Bacu, or Baku (40º 22' N, 49º 46' E); and Xamax, clearly meaning Khachmas, slightly south of Derbent (42º 5' N, 48º 8' E). All these names are modern rather than Ptolemaic.
Another typical feature of portulan charts is that they show the Mediterranean according to the magnetic rather than the geographical north. The resulting distortion of the sea causes difficulties in adjusting it to the Red Sea, a problem that cartographers solved in one of two ways: extending the Red Sea or exaggerating the width of the Suez isthmus. The Cantino planisphere adopts the latter course, possibly based on the confused information brought back from the Orient by Vasco da Gama’s fleet. This information established that the caravans of camels that transported the spices from the Red Sea port where it was offloaded to Cairo or Alexandria had taken three months. It is not known how the cartographer who produced this chart solved the problem, since the chart of Africa – the only one to show the entire Red Sea – has disappeared. The surviving chart only shows a small part, revealing the inaccurate depiction of the Sinai Peninsula, which is only bordered by a small area of sea to the east, which is clearly intended to represent the Gulf of Aqaba. This is at least partly explained by the widely confirmed fact that the Muslims had not allowed any Christian access to the Red Sea since the time of the crusades. Indeed, the Portuguese only sailed to the southern reaches of the sea in 1541, during Estêvão da Gama’s expedition, since those by Afonso de Albuquerque (1513) and Lopo Soares de Albergaria (1517) had got no further than Jeddah (21º 38' N, 39º 17' E), the port that serves Mecca. In any case, the image of a mountain surmounted by the two Tablets of the Law and a flag where the words Sinai Mons can still be read, leave no room for doubt.
As noted, the outline of the Mediterranean coast is almost perfect. The only distortions appear in the regions where western Christians did not travel or where navigation using the compass was not used: in the former case, the Red Sea, the Caspian and the Persian Gulf; in the latter, the Baltic. The distortion of the Baltic is more evident in the chart showing Northern Europe, but can also be seen here, specifically in the outline of Denmark. In turn, the image of the Caspian Sea seems to be a compromise solution between Ptolemaic cartography, where the longitude was greater than the latitude, and some experience-based knowledge. This not only allowed modern place-names to be inserted on the west coast and even slightly beyond the Volga delta, but also led to attempts to draw the peninsulas of Apsheron (40º 16' N, 50º 27' E) on the west coast and of Mangyshlak (c. 44º N, 42º E) on the east. Besides this, the most significant errors in this chart are the course of the Euphrates, which is set too far east, and above all showing the Tigris as the delta of the Euphrates rather than as a separate river.