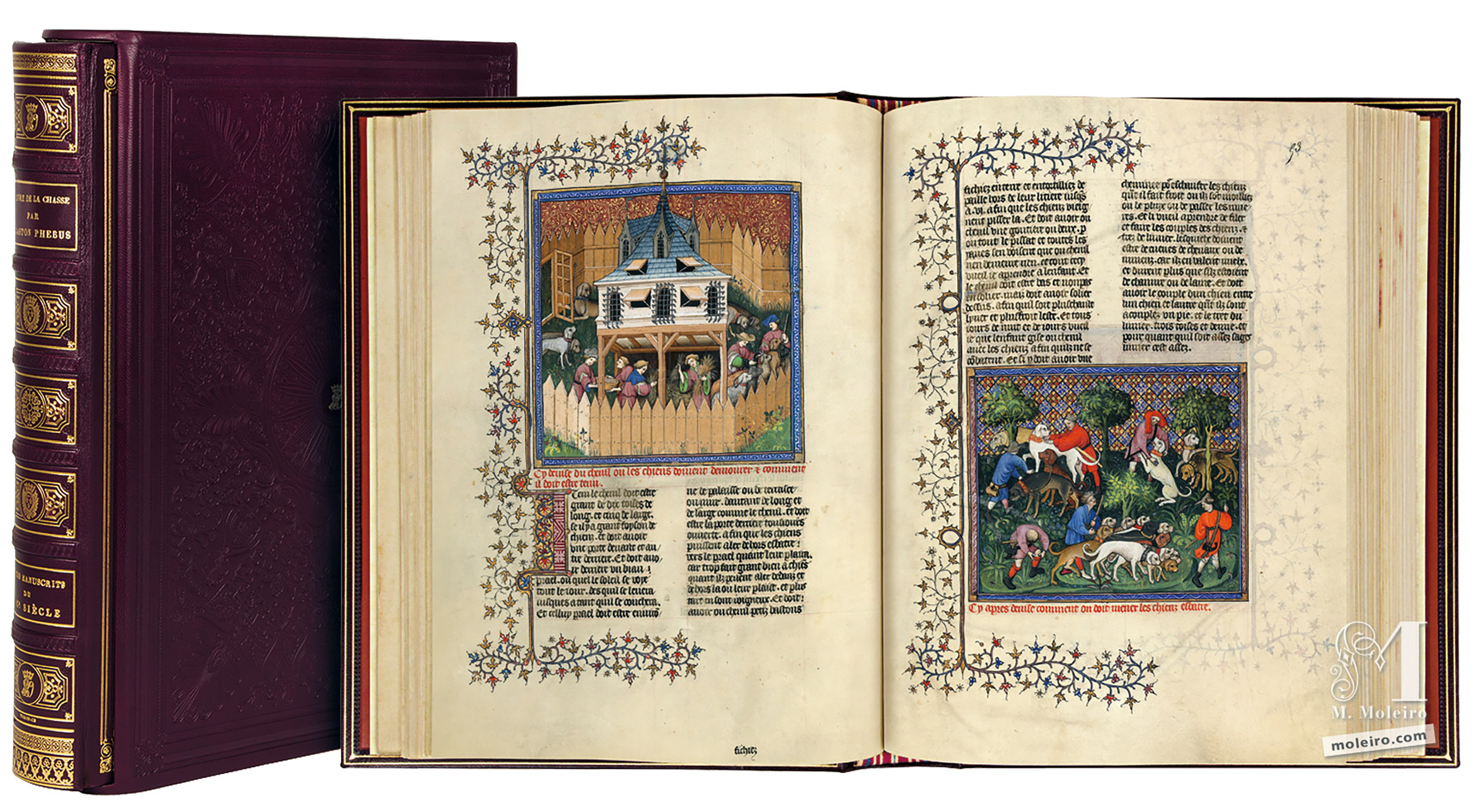 On the first day of May in the year of grace 1387, Gaston III, known as Fébus, Count of Foix and Lord of Béarn, started drafting his Livre de la chasse. Such a precise date must give rise to plenty of questions. Did Fébus not have better things to do that day than pick up his pen?

In fact, it was the day before the eve of the summer feast of the Holy Cross, celebrated on May 3rd, a formal occasion that coincided with the start of the hart hunting season, the Count of Foix's favourite form of hunting. This assumes that the preceding days had been taken up with preparations for this festive event, after the long months of winter when the hunt was put on hold. Certainly, one could continue to hunt wild boar until the end of November and even up to the beginning of Lent. The hare and the roe deer could be hunted all year round. Nevertheless, this winter hunting remained an occasional event. [...] The legend to the "déjeuner sur l’herbe", which prefaces in all the illustrated manuscripts of Fébus’ work, reveals the start of the real hunt:

‘This shows how the gathering should be held in the summer and in winter.’

The scene in no way evokes winter, nor even autumn. What is nowadays called the "report back" takes place in the open air. The trees have retained their green foliage. The pitchers of wine have been put to cool in a stream, where the dogs drink greedily. So, nothing evokes winter and its frosts; "winter" refers to what is known as the winter feast of the Holy Cross, of 14th September. This festive meal on the miniature is that of the fine days of 3rd May and 14th September. Fébus thus wanted to link the drafting of the first pages of his treatise to the opening of the hunt season, by making the closest possible association between theoretical exposition and practice in the field. Today, this is no longer easily understood as the hunting season now coincides with the season of harsh weather.

The drafting of the treatise on hunting was only finished two years later, probably towards the middle or end of 1389. Gaston de Foix was then fifty-eight years old.


A lesson of hunt – a lesson for life

The treatise of Gaston de Foix is not divided into books. It comprises 85 chapters and as many illustrations, in fact 86 if one counts that of the prologue, the illustration taking precedence over the text, which always follows the image. This uninterrupted series of 85 chapters rapidly shows a thematic division, even if this is not materialised. It is, first of all, a question of the animals that are hunted, from the hart and all about its nature, to the otter and all about its nature. It then discusses hounds and the various breeds of dog. 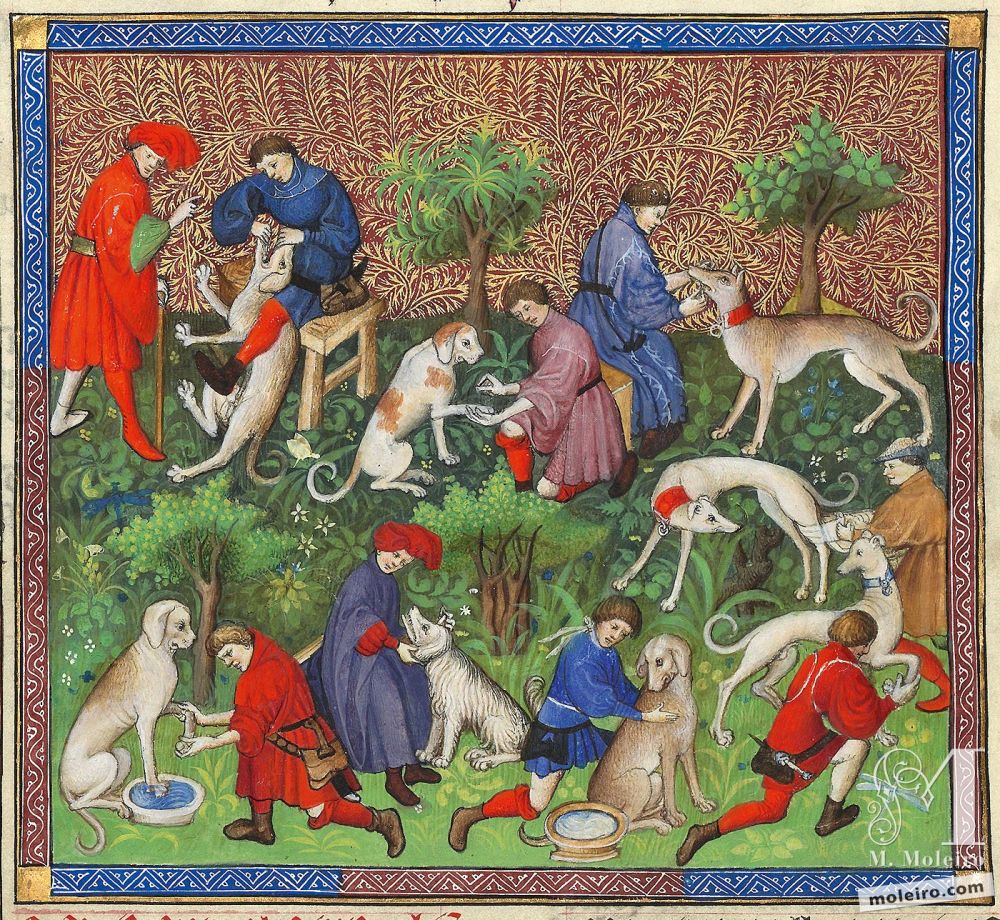 It then passes on to matters relating to the huntsman's apprenticeship: from the care of hounds, to how to make nets, to call and to blow the horn, to follow the hounds on a trail, to seek out game in forest or field. Actual hunting commenced with the gathering, which we have seen to be a meal in the open air where those who, early in the morning, sought out game came to present their report to the Master. The gathering is, thus, what precedes the chase of the hart and other animals, first of all herbivores, wild and gentle beasts, then biting animals: wild boar, wolves, foxes etc. Hart and wild boar hunting is clearly favoured by Fébus; nevertheless, he did not disdain the hunting of roe deer. Bear hunting, even if rarely practised, was less mythical than it is thought to be and it is carefully described. Nonetheless, it was not as the outcome of a bear hunt that Fébus suddenly died, in the middle of summer, on the plain, at a time when that animal had certainly returned to the mountains. Moreover, he considered hunting the wolf to be almost impossible, as that animal could not be taken except by surprise, after having been drawn to bait and dogs set upon it to prevent it fleeing.

What comes next, the last 15 chapters of the manuscript, is preceded by a long preface running to five folios, nearly as long as the introduction, which is six folios long. This notice, unlike the preface, is not graced with an introductory image, but preceded almost regretfully with a picture where three beaters armed with staves or long spears drive animals of all species towards nets set out as barriers. Fébus took no pleasure in drafting the instructions that follow: he explains himself unhesitatingly and bluntly:

‘I do not willingly talk of this, as I should not teach how to take beasts, save nobly and with gentility, for thus there would be more beasts if one did not falsely kill them.’

It was out of charity for those who could not do otherwise, that he agreed to describe methods of which he disapproved, which he, in truth, despised. Those who indulged in such vulgar practices generally looked bad: "so, when our new Hunter wants to take the hart vilely and cutting short his pleasure, for it is truly an occupation of a fat old man or one who does not want to work." The original text adds to these fat old men, to these idlers, an additional category, which the Bossuat brothers, from a sense of propriety, excised from their translation into modern French: the prelates, in other words: churchmen.

The Livre de la chasse of Gaston de Foix did not appear out of thin air. What is best called "French style hunting", the only type that really interested the Count of Foix, nonetheless only achieved its definitive form with the drafting of his treatise. One could say that this work had been awaited, since only a few years after its drafting, in the first years of the 13th century, it was translated into English by Edward Duke of York, who died at the battle of Agincourt in 1415. This was a partial translation, which only reproduced what dealt with hunting "par force" and which was entitled Master of Game. Until the late 16th century, the Livre de la Chasse was the hunting enthusiast’s bible, as its text, intended for young readers, combines the conciseness of a lesson with the keen interest of a man devoted to the subject.

‘About how the boar must be hunted and slain’ (folio 94r) 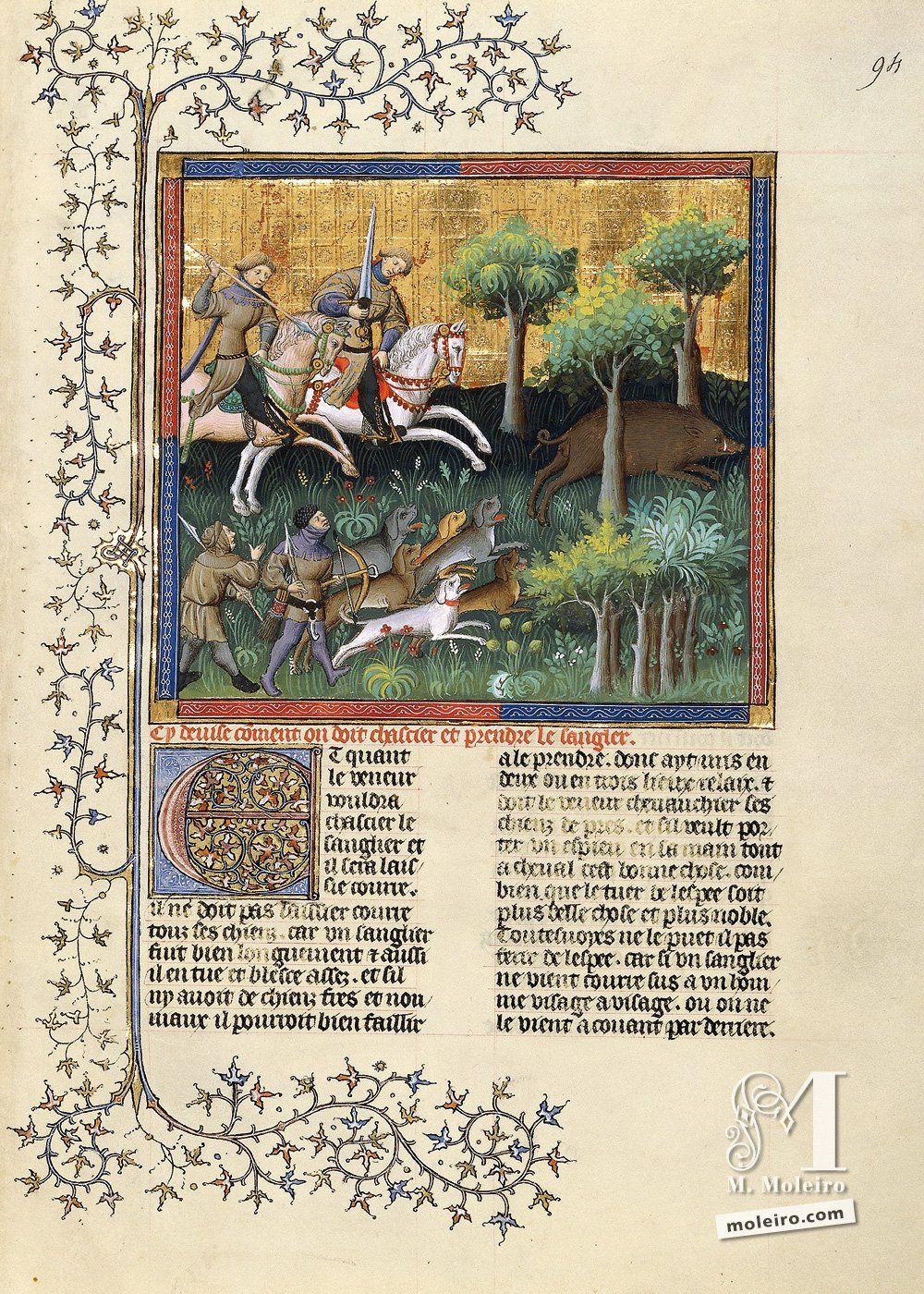 A small group of six dogs still close together and all hunting by sight, heads aloft, harry a boar running away across open terrain or meadowland with a few trees. This type of landscape is a regular feature in the two manuscripts commissioned by Fébus, but the landscape artist of Français 616 often opts for different landscapes. Two horsemen dressed in grey, the first one holding his sword upright, and the other brandishing a spear, gallop behind the animal, whilst the two kennelmen on foot armed with a spear and crossbow merely watch as they walk slowly behind their hounds. A boar can be slain with a spear or sword or crossbow, but the noble way is to slay it with a sword without dismounting from one’s horse. Judging by the size of its tusks, this is a four-year-old boar. Its curly tail is a trait normally only found in domestic pigs. In actual fact, the medieval boar often had this sort of tail instead of the short, straight tail of its wild cousin. Domestic pigs often roamed free in the woods, particularly in search of pannage in November, but since this was also the boar’s rutting time, woodland mating was common. The wild boars depicted in our manuscript all have curly tails – a sign of their mixed breeding – even though they are black and long-haired.


This was an excerpt from the commentary volume of the Livre de la chasse by Yves Christe (University of Geneva).