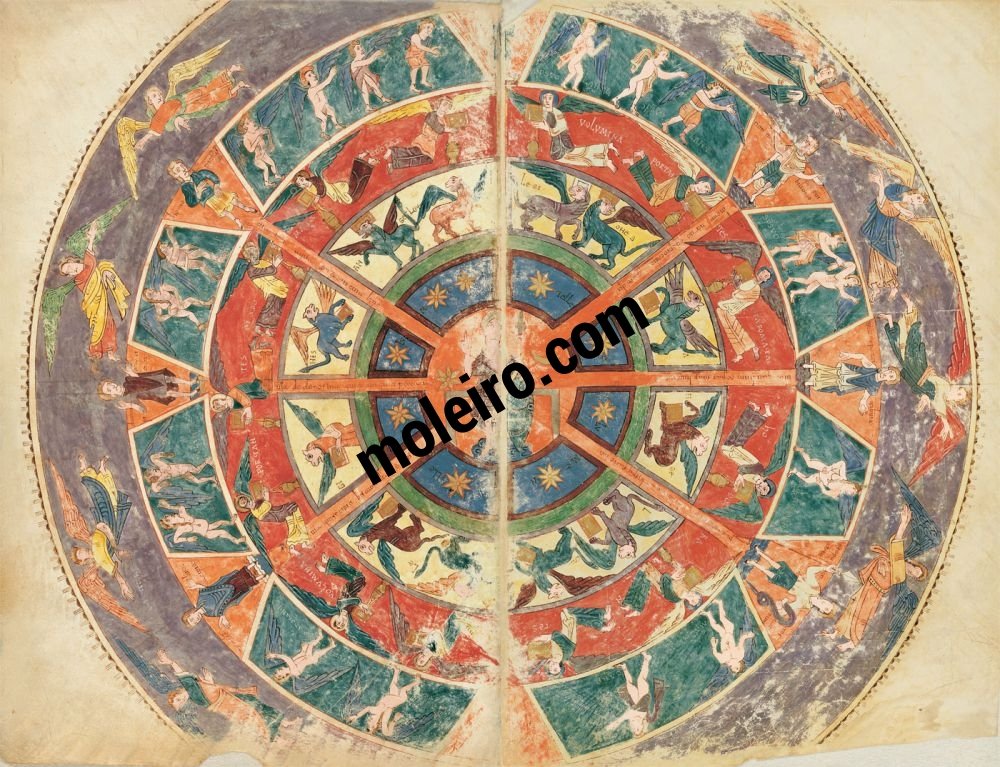 The classic figure defined as cupular in the centre of the composition, has been interpreted as Christ the cosmocrator enthroned with his right hand raised in blessing. He is flanked by the sun and the moon, elements linked to him in that period mainly at crucifixions. Until now however, there have been no representations of Christ or God as soldiers. Furthermore, although it was not defined in tenth-century, western, Hispanic kingdoms, the Lord in Majesty was depicted in most representations with a cruciform nimbus; however the pointed shape around his head is similar to the one around the warrior on folio 213. This may be an indirect reference to the Saviour since Christ is assimilated with Helios-Apollo, the Cosmocrator. The enthroned figure with a spear and shield may have stemmed in the distant past from the monumental paintings of antiquity depicting a god in the same position, as can be seen in an early fourth-century frieze (housed formerly in Barberini Palace and currently in the Museo Nazionale delle Terme in Rome) showing a goddess with a shield, ceremonial staff and a victoria in one of her hands. This image, which is almost identical apart from the staff replaced by a spear, is to be found in a drawing of the personification of Rome contained in what is known as the Philocalus’ Calendar (Vatican, Apostolic Library, Cod. Barb. Lat. 2154, f. 2r), which is a copy of a fourth-century work. This image is also repeated in the same work in the portrait of consul Constantius II (f. 13r). The nine golden stars in the following circle may be related to the hierarchy of angels based upon the classification that Dionysius the Pseudo-Areopagite provided in Caelestis hierarchia, although it did have antecedents. One explanation for the lionlike figures in the following circle may possibly be the similar pronunciation of legions and lions, causing the artist to show angels as lions, it being no coincidence that they are twelve in number. The naked figures in the fourth ring – labelled not angeli but spiritus – and represented in the third and fifth rings according to the iconography typical of that period, are other beings stemming from an ancient model unrelated to Christian orthodoxy whose meaning was lost when it was included in the Gerona Beatus. The last circle, had it been complete, would have contained ten angels.

Generally speaking it is possible that the composition of the image of heaven, like other subsequent images to be seen in the Gerona Beatus, stems from many sources, including particularly images of astronomy dating from late antiquity and the early Middle Ages or, perhaps, from Gnostic sources which often used intricate diagrams with a cosmic meaning. It is difficult to trace the transmission of an image, particularly an image modified by the passage of time, originating in the early days of Christianity and possibly greatly influenced by Gnosticism – had it not been Christian Gnostic from the outset – until the last quarter of the 10th century. From the 4th century onwards, the Western Roman Empire was home to many pagan and Gnostic customs and others related to pre-Christian beliefs alongside Christianity. A work penned by Priscilianus or one of his disciples describes beings similar to those in the image of heaven that could appear in a Gnostic diagram. Despite the on-going condemnation of the Church in Hispania and elsewhere, these heterodox ideas persisted until as late as the 10th century. It is however highly likely that only this figurative aspect, albeit greatly modified, survived in the circles in which the Gerona Beatus was illustrated, having lost the heretic or having adapted an image that, whilst of a heterodox meaning, was useful for illustrating an orthodox belief. C. O. Nordström pointed out the parallel with an illustration in a manuscript of Ptolemy (Vatican, Apostolic Library, MS. Vat. gr. 1291, f. 9r), that was copied between 813 and 820 from a model dating from late Antiquity: the illustration is divided into different sections by concentric circles and twelve radii which would be the equivalent of the radial lines with inscriptions in the Gerona Beatus. The sun, Helios, is in the centre in his chariot: this would correspond to the figure of Christ enthroned. This type of images is however different from the one in the Gerona Beatus which was undoubtedly inspired by a late Antiquity model, which is now missing but that must have existed in the library of the monastery where the Gerona manuscript was copied.