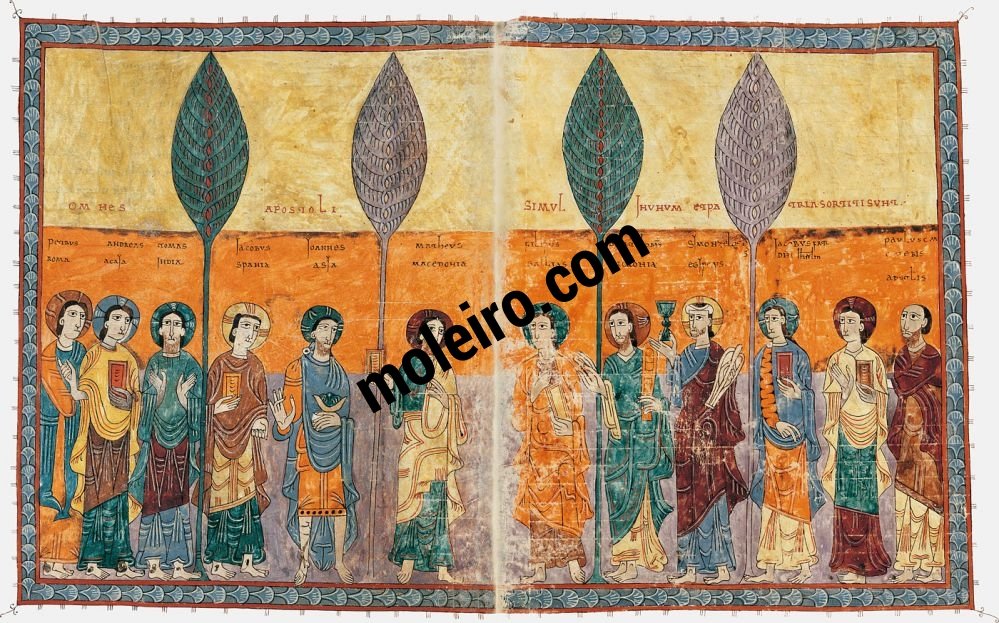 f. 52v, Prologue: on the Church: portraits of the apostoles stating where they preached

In the part of the prologue that concerns the Church, Beatus follows mainly St Isidore and, to a lesser extent, St Gregory the Great, Tyconius and St Jerome. He provides a short treatise about ecclesiology designed to explain the meaning of Christ, the angels, patriarchs, prophets, apostles, martyrs, clergy, monks, religious and the faithful.

This image, found only in branch IIb Beatus, covers two folios (verso and recto in the Gerona Beatus), and features the twelve apostles, most shown in a three-quarter pose, standing, with a nimbus and making a variety of gestures as if in conversation. They look towards the centre and above them is a legend which reads: “OMNES/APOSTOLI/SIMVL/IN VNVM ET PA-/TRIA SORTITI SVNT”. They are all gathered in groups of three on the far right and left and of two in the middle, separated by tall, highly decorative, stylised trees. Their origin can be traced back to the front panels of certain Early Christian sarcophagi which show the twelve apostles facing forward, such as one dated in the 4th century from Puebla Nueva (Toledo). Tenth-century, Hispanic paintings did not usually differentiate the apostles but in this instance considerable efforts were made to characterise most of the figures by their physiognomy or the objects held in their hands. Their names and the places where they preached are written above each, hence we read from left to right “petrvs”, “ROMA”; “ANDREAS”, “acaja”, with a book in his hand; “TOMAS”, “INDIA”, facing straight forward, bearded and with his hands open to show his palms; and “Iacobvs”, “SPANIA”, with a codex in his right hand. The earliest mention of St James preaching in Hispania can be traced back, albeit rather vaguely, to St Jerome: “Now when Jesus saw the apostles mending their nets on the shores of the Sea of Nazareth, he called them and sent them to the great sea and changed them from fishers of fish into fishers of men, and they preached the Gospels from Jerusalem to Illyria and the Spains (“qui de Ierusalem usque ad Illyriam et Hispaniam evangelium praedicarent”)”. This reference marked the start of the tradition of St James preaching in Spain, as can be seen in the Breviarium apostolorum ex nomine vel locis ubi predicaverunt, an apocryphal work that spread to the Iberian Peninsula in around the 6th century in the Latin version of the original writing in Greek based upon documents that were also apocryphal, which alludes directly to the Iberian Peninsula: “It was St James – interpreted as the supplanter, the son of Zebedee, the brother of John – who preached in the Spains and in the western regions and who was slain by the sword under Herod and was buried in Acaya Marmorica on the eighth day before the calends of August”, which is therefore the first explicit reference to St James preaching in Hispania. The Commentaries on the Apocalypse by Beatus on the other hand is the first widely-disseminated text known to associate St James with the Iberian Peninsula. This was continued in the hymn O Dei Verbum composed specially for the consecration of a church, and followed several decades later by the invention of the apostle’s burial in Galicia – a region governed in turn by Beatus’ patrons. The legends on this folio continue with “IOANNES”, “ASIA” above the bearded apostle – the only one in short clothes – with a goblet in his left hand, possibly in reference to Aristodemus’ chalice containing, according to the legend, the drink he attempted to poison him with, and then “MATHEVS”, “macedonia” over the bearded apostle holding a book; “FILIPVS”, “GALLIAS” with a codex in his left hand; “BARTOLOM[EU]S”, “licaonia” with a beard and an object that could be a rolled-up phylactery; “SYMON ZELOTE-/S”, “egjptus” also with a beard and a goblet in his right hand – possibly in reference, as Beatus’ text suggests, to Canaan, the land of his origin where the miracle of the water being turned into wine took place – and a Greco-Roman lyre in his left. Next comes “Iacobvs fr[a]t[er]/d[omi]ni”, “Ierusalem” with a book in his left hand. The following apostle is not identified nor is any mention made of the place where he preached: these details are missing in the text of the Gerona Beatus too but it is in all likelihood St Jude Thaddeus, sent to King Abgarus of Edessa . Finally depicted with a beard and very high forehead, as dictated by tradition and as was to become his usual iconography, is “pavlvs cvm ceteris ap[o]st[o]lis”, a paraphrase of Beatus’ text (f. 52r). This list of the apostles’ names is based on Etymologiae by St Isidore of Seville although use is also made of another text, a pseudo Isidorian text entitled De Ortu et Obitu Patrum, which originated in a Byzantine catalogue of the apostles which assigned a preaching region to each.

This image, found in branch IIb alone, may perhaps have been an innovation by Maius included in one of the miniatures that has disappeared from the Tábara Beatus: it is exclusive to the extant, tenth-century Beatus and is only to be found again in the later Beatus, albeit in a different configuration having discarded the frieze layout . The provenance of the portrait of the apostles may be two-fold. On the one hand, the collections of biographies on papyrus scrolls were illustrated in Antiquity by portraits: a very widespread procedure. The representation of a figure or author of a text standing or in a medallion has ancient models. When Christians began to add portraits to different books of the Bible, they adapted the standing figure of the author used in Antiquity – the style most commonplace when the scroll was still in use – employing it frequently. As a result, the prophets appear in this pose in particular, sometimes holding the rolled-up scroll in their left hand – as in the famous statue of Democritus – or reading the unrolled scroll, as in the portrait of Euripides or Virgil. After the codex was invented, a trend developed of devoting entire pages to single miniatures and separating them from the text in the columns they were inserted into.