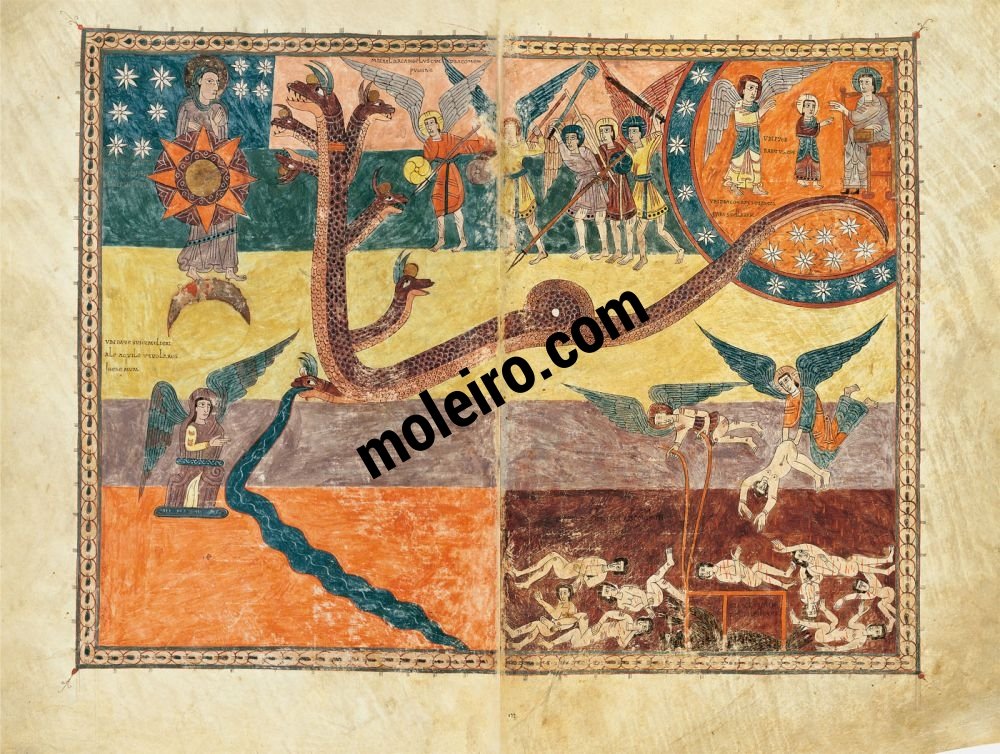 The illustration covers two folios and depicts the most narrative aspects of the storia although attempts were made to synthesise it, firstly, by showing the features situated on earth or in hell – not mentioned in the storia – in the bottom part, and those that occur in heaven, in the upper part. Similarly, synchronism has been used to show, as in the case of the snake, a single person belonging to several moments, as can be seen in its relationship to the other figures in the painting. Depicted on folio 171v is a woman with a sun shape at her waist and the moon, like an inverted crescent quarter, at her feet. Instead of being crowned she is surrounded by ten, not twelve, stars and the legend on her left reads: “mvlier amicta/sole et lvna/svb pedibvs eivs”. Beside her is the dragon like a large snake, in keeping with the custom of late Antiquity, with seven heads: a large, central one with a toothed mouth gaping threateningly, and three smaller ones on each side of the body similar to the one in the centre. Five heads have two horns and two have one. Upon each head is a crown in the form of a golden circle, like those of the infernal locusts. The lowest head vomits a torrent of blue water, surrounded by wavy lines set, as usual, at a slant to divert the original direction. The woman appears again next to the river, seated with two-colour wings, and the legend “vbi date svnt mvlieri/ale aqvile vt volaret/in eremvm” overhead. The dragon in the upper part is being attacked by five angels of similar appearance – wearing short garments and armed with bucklers, swords, spears and maces – even though the legend reads “michael arcangelvs cvm dragonem/pvgnat”. To their right is a large circle segment surrounded by stars representing heaven featuring an angel presenting a child to God, with a legend between them reading “vbi pver rabtvs est”. God is seated upon a throne holding a book in his lap with his left hand and stretching his right hand out to receive the child. The three figures gesture as if in dialogue. The dragon’s tail can be seen in the lower part of this section seeming to drag seven stars down, as described in the legend “vbi draco traxit tertia/pars stellarvm”. Finally, in the bottom section of the folio is a scene that already featured in the pictorial archetype, as demonstrated by the fact that it appears in all the manuscripts. It shows the evil angels represented as men without wings, undoubtedly because in the explanatio they symbolize the wicked, cast into hell. The Gerona Beatus portrays an angel throwing one of these men into Gehenna and another with large pincers tormenting the wicked one shown in profile as a totally deformed and dark-coloured being imprisoned in a sort of cage or enclosure, according to the legend “diabolvs in in-/ferno tenetvr”. The abyss, riddled with tiny, red lines representing fire, features nine naked men in floppy poses but with open eyes who represent the condemned angels, with the legend “qvos draco traxit angeli in in-/fernvm” overhead. This scene is not explained by the storia which only describes how St Michael and his angels fight against the dragon and the evil angels and how the latter are subsequently cast onto the earth, as can be seen in other early medieval cycles in Europe. It may have been influenced partly by the explanatio which compares the men cast out by the angels to the stars dragged down by the dragon’s tail, which is represented just overhead. It is however also necessary to consider certain pictorial elements in the Beatus manuscripts which seem to influence this scene to a greater extent, particularly as regards the demon tied down and the men floating in hell, which could have been transferred from the illustration showing the Dragon tied down and the devil enchained (f. 224v), depicting Satan, imprisoned in hell and fastened in the stocks. Furthermore, the explanatio, which follows the text by Victorinus of Pettau, emphasises that the devil shall live until the end of the world in his receptacle, i.e. the Anti-Christ enchained. The naked bodies cast into eternal torture are reminiscent of representations of the Final Judgment in the European version of the Revelation which, in the respective illustration in tenth-century Beatus depicts them in a similar manner – floating in hell, although the angels casting them in are absent. This is in any case yet another indication that the original Beatus manuscript with illustrations was based on an illustrated commentary.

This illustration in the archetype manuscript may have covered a single folio as suggested by the copies featuring the earliest version of stemma I, i.e. Burgo de Osma (f. 118r) and Lorvão (f. 153v). A subsequent phase is thought to have shown the scene in a monumental manner covering two folios, a layout adopted by some stemma I manuscripts – possibly due to the influence of the iconographic renovation carried out in the 10th century, as in the Vitr. 14-1 Beatus (f. 109v, the following folio has been cut out) and the Escorial Beatus (ff. 104v-105r), in both of which it occupies a column of text – and all those in stemma II, which cover the two pages completely. In stemma I, the sun is above the woman’s head and does not cover her body as in the manuscripts in stemma II which show the moon as a first quarter as opposed to as a disk in stemma I. Some of the copies in this stemma, such as the Vitr. 14-1 Beatus and the Escorial manuscript mentioned above, show the mulier amicta solis praying as in most of the manuscripts in branch IIb, except the Gerona Beatus, in which her pose is similar but not identical to that of branch IIa – since she seems to be pointing at the dragon – although her gesture could be one of fear or some sort of protection from the beast. This is the woman, albeit with wings, that presents the child in her arms to God in stemma I rather than an angel. The woman with wings appears facing forwards with outstretched arms in most of branch IIb manuscripts as if at prayer, except yet again in Gerona which depicts her, as in branch IIa, in a three-quarter view seated upon a couch. In any case, the repetition of the woman in both stemmata, first garbed in the sun and then with wings, stems from ancient prototypes in which the woman in the Revelation was represented twice and possibly separated by lines of text before being subsequently combined into a single image. Stemma I does not show St Michael and his angels fighting the dragon – an aspect that does however appear in stemma II, more in keeping with the storia. Branch IIa does however always show at least one angel flying horizontally to fight and they are usually four in number – two flying over and two vertical – whereas branch IIb depicts five angels always standing. Furthermore, the child being presented is received by God alone in stemma I, whereas branch IIa – possibly to ensure a symmetrical composition – shows an angel behind the Lord’s throne: an aspect that does not appear in IIb. The snake in stemma I, perhaps due to a lack of space, is shown vertical, whereas it is always horizontal in branch II. However, whereas branch IIa depicts the heads with very long necks springing from the complicated central coil in the body, in branch IIb they are situated on both sides of the main body, placing little emphasis on the necks. Five of the heads in branch IIa look at the representations of the woman and two at the fight against St Michael, whereas in branch IIb, three are turned towards the conflict. The water vomited by one of the heads has a rather short, wide shape in branch IIa, as in most stemma I copies, in comparison with IIb which is far larger, like a river. The bottom part of the recto folio in branch IIa usually depicts a figuration of the desert in a very succinct manner consisting of two promontories between highly schematic trees, an aspect that features in no branch IIb manuscript. Finally, in the bottom scene are the angels simply casting the men – always shown in an inverted position – into the abyss in stemma I. Stemma II on the other hand, shows an angel doing other things: restraining the devil with a chain in IIa and tormenting him with pincers in IIb. Furthermore, IIa usually depicts three heavenly messengers – the one tying down the demon flanked symmetrically by another two casting the men into Gehenna – whilst branch IIb shows just two.