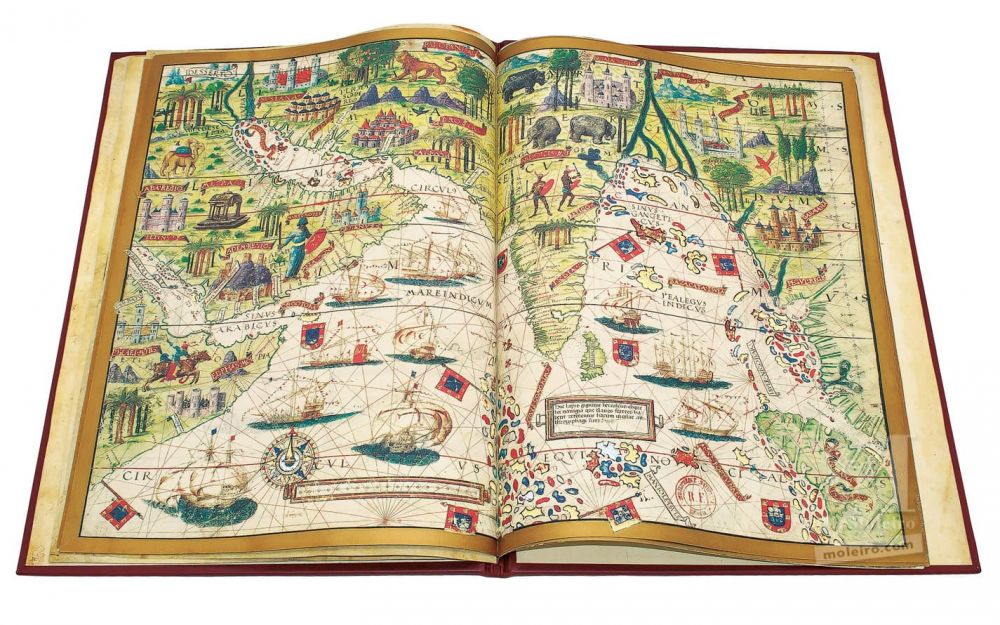 Given its rich illuminations, this is one of the most beautiful charts in the Atlas Miller. Cape Guardafui (11° 50' N, 51° 20' E) is given a Portuguese name rather than Promontorium Aromatum, although the illumination depicting the nearby mountains bear the Latin Ptolemaic name of Elephans Mons, “Mount Elephant”. The chart shows the Horn of Africa and part of the Red Sea, Arabia, the Persian Gulf, Iran, India (including Ceylon), the west coast of the Indo-Chinese Peninsula as far as the straits of Malacca, and part of the island of Sumatra, which is repeated in its complete form in the chart of the South East Asian archipelago (analysed below). In terms of cartographic accuracy, it is clearly divided into two parts: apart from a few minor details, the area west of Ceylon is generally a faithful depiction, only using ancient geography to counter contemporary lack of knowledge about the inland areas; from Coromandel to the east, there are far more imperfections and far greater reliance on Ptolemaic geography.
The Indian Ocean has two different names. In the part that corresponds to the Arabian Sea, it is called Mare Indicum, while the area showing the Gulf of Bengal is named Pealegus Indicus (whose proper Latin form should be Pelagus Indicum) as in the previous chart. The Ptolemaic name – Sinus Gangeticus, the “gulf of the Ganges” – appears further north, in the upper reaches of the gulf. The Persian Gulf is called Mare Persicum, which may be a simple translation of the Arab Bahr Fârîs, which some medieval geographers also used for the Gulf of Oman and even for the entire Indian Ocean. As was then standard usage, albeit in direct contrast with manuscripts or printed Ptolemaic maps from the period, Sinus Arabicus is used to refer to the Gulf of Aden and Rubrum Mare for the Red Sea proper, i.e. beyond the mouth of the straits. As is known, the latter term was the Latin translation of the Greek Erythrà Thálassa or Erythròs Póntos, which in Antiquity was frequently used to refer to the entire Indian Ocean.
The division of the chart into climates, the line of the equator and the tropics and the latitude scale are identical to the preceding chart. In contrast, only the distance scale is shown horizontally, parallel to the equator rather than to the meridians, but also without any graduation. Like the previous chart, each division on the scale is exactly ¾ of one degree of latitude. Although it is supposedly a geographical map, it retains many features of the nautical charts on which it was based, namely the rhumb lines and the place-names exclusively for coastal locations, with no inland cities other than those normally depicted in illuminations. This is a clear contrast with medieval maps such as the one by Fra Mauro, which attempted to provide detailed imagery of the entire inhabited world, even if not in their correct positions. Such maps showed “Deli, cità grandissima”, “Bisenegal” (Vijayanagar, now Hampi, in the Deccan interior, 15° 20' N, 76° 30' E), “Peligondi” (Penukonda or Penagonda, somewhat further to the south, 14° 5' N, 77° 38' E), Sultanpur, by Lahore, etc., even though Delhi had already been described around 1515 by Duarte Barbosa and Tomé Pires, and Vijayanagar had already been visited by Portuguese embassies.
The illuminations on the ocean show Moorish or Portuguese vessels, with the former in the upper section and closer to the coast, and the latter south of the 5º parallel, and therefore on the open seas. The Portuguese vessels are all naus with forecastles and square sails bearing the cross of Christ. In contrast, there is a range of Moorish vessels, with one or two masts, some with lateen sails, low sides and protruding rams, which suggest fustes or galleys, others with square sails that seem like cargo ships or naus. There is also a seven-mast ship at the entrance to the Gulf of Bengal, equipped with a fore- and a stern-castle, a double lateral helm without a sternpost, and armed with a ram. The image is clearly an attempt to depict a large Malay junk.