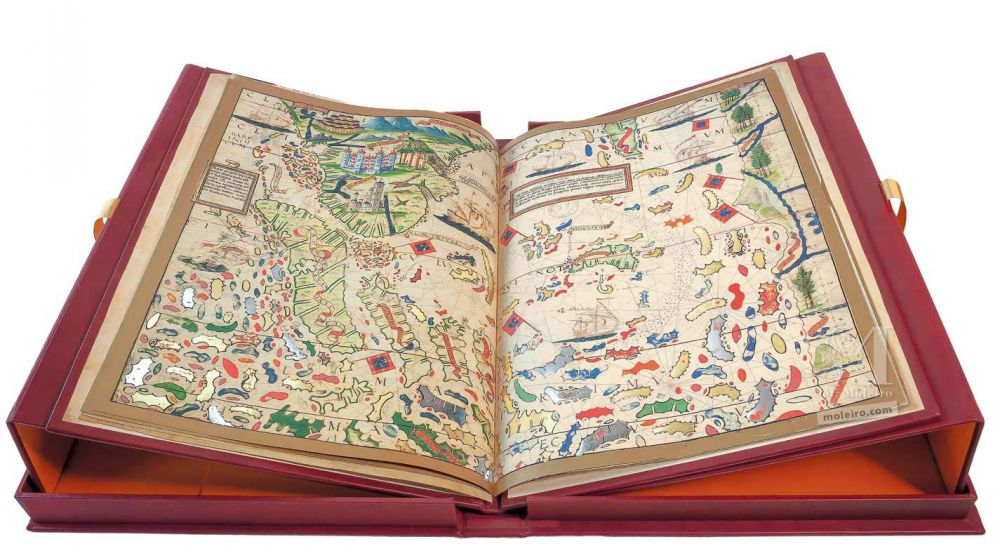 The supposed eastern land mass
The image of this supposed land mass – further examined in the following chart, which aims to draw it in its entirety – is a complete fraud that does not even correspond to the one in that chart, on the back of this sheet.
The shape of the coast and the line of one of the rivers, with two separate mouths, are copied from the map of the Magnus Sinus in the atlas by Ptolemy, or to be more exact, the one by Planudes. However, while the east coast of the Magnus Sinus runs from 18º N to 9º S, the latitude is stretched, reaching at least 23º N, the parallel that coincides with the upper edge of the map, and a similar amount to the south, reaching its lower edge. Thus, the said coastline is stretched from a genuine range of 27º to one of at least 46º.
Just five place-names are given for rivers: from north to south – Cacoto, Bazaca, Papioco or perhaps Parioco, Zaba and Malu. The origins of these names cannot be determined, although they sometimes seem to suggest other geographical features found in the atlas. Thus, Bazaca may be Bazacata, an island shown in the middle of the Sinus Gangeticus, or perhaps Balaca, which Ptolemy identifies as an island off Taprobana, at 5º 20’ S, 129º (= 101º) E. In turn, Parioco (or Papioco) suggests Parloco, the name of an island in the next chart, which may perhaps be identified as Japan. In Ptolemaic geography, Zaba is the name of an island located on the equator at 135º (= 107º) E, east of Taprobana, while Zabai (Sabe, in other versions), is a city just beyond the Magnum Promontorium, the southern tip of Aurea Chersonesus (the Malay Peninsula). Malu could be several place-names found in Ptolemaic geography: Male, one of the regions of India Intra Gangem; Malea, a mountain in Taprobana; Maleum, a promontory in the Gulf of Barygaza (Baruch) which corresponds to that of Cambay, within Cisgangetic India; Maleus, a mountain in the region of the Suari, on the Ganges; or Malli, a people on the banks of the Hydaspes (now Jhelum), one of the rivers in the Punjab.
The illuminations show some mountains and trees that seem to be Dicotyledoneae, while there are no palm trees, even around the equator.