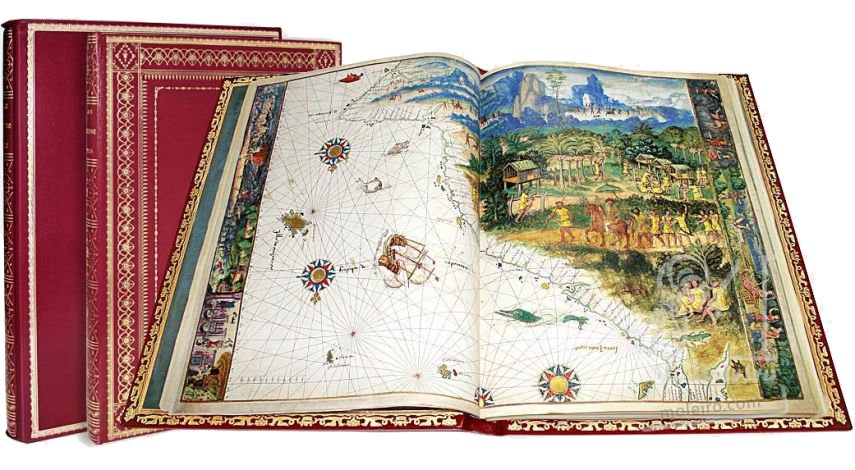 From the editor to the reader
Manuel Moleiro

The prolific Dieppe school of Northern France produced some of the atlases with the most innovative and beautiful marginalia. The Vallard Atlas, whilst ascribed to the Dieppe cartography school, has a clearly Portuguese flavour due to either its anonymous creator or the model that inspired it. It is quite significant to note that the atlas depicts the Eastern Coast of Australia for the first time in history, 200 years before the voyages of Captain Cook, erroneously considered the continent's discoverer. Like the Atlas Miller, one of its most noteworthy characteristics are the miniatures depicting colonization scenes from the 16th century, plus countless illustrations of the daily life of the native population.
The atlas starts with an introductory text on the activity of the sun, followed by a calendar. A curious aspect of this atlas is the fact that in almost all the maps the North is oriented towards the bottom of the page and the South is at the top. This was, to all appearances, a habit of Muslim cartographers but this practice was quite rare in Christian Europe. It can be seen, for example, in the various portolan charts of the atlas drawn in c. 1321 by Pedro Vesconte (Lyon, Municipal Library).
Contents:
1. “Terra Java” (east coast of Australia’)
2. “La Jave” (north coast of Australia’), East Indies, part of Asia
3. “Terra Java” (west coast of Australia’)
4. Arabian Sea, Red Sea, and Persian Gulf
5. Southern Africa and southwest Indian Ocean
6. Atlantic Ocean with coast of Africa and Brazil
7. Northwest Africa
8. Europe and northern Africa
9. North America and Canada, east coast
10. West Indies, Mexico, Central America, northern South America
11. Northeastern South America
12. Southeastern South America, Straits of Magellan
13. Western Europe and northwestern Africa
14. Adriatic Sea


Black and red ink is used for nomenclature in a minuscule script, with gold for area names; land masses are outlined in color with islands painted blue, red or gold; numerous compass roses on each chart with the usual 32 rhumb line network in black, red and green ink for the principal directions.

Charts 14 and 15 seem to be made by a second person since they differ in cartographic technique and artistic style. On title page, f. 1, under an armillary sphere is written “Nicolas Vallard de Dieppe, 1547.”