Calendars in Books of Hours are endlessly fascinating, both for their texts as well as for their pictures. A review of the components and feasts listed within the Hours of Henry VIII reveals interesting details of its composition. The calendar is also especially rich in images, embellished not only with the traditional pictures of the labors of the months and the signs of the zodiac, but also with vignettes, in the side and bottom margins, illustrating the main feasts cited with the months.

As is typical in medieval and Renaissance Books of Hours, the calendar of the Hours of Henry VIII does not tell time by enumerating the days of the month, such as January 1, 2, 3, etc. Instead, it lists the feast days of the month in the manner of a perpetual calendar. (Medieval calendars never contain movable feasts such as Easter or Pentecost.) Most of the feasts are saints’ days. Near the bottom of the first column on folio 1, for example, we can find Felix (January 14), a priest who was martyred in Rome by boys who attacked and killed him with their iron styli, and Maurus (January 15), the sixth-century Benedictine abbot who was known to walk on water. The saints’ names are written in Latin, the common language of most Books of Hours (although the vernacular was also often used in calendars).

The names are written in the genitive – Felicis and Mauri – because they are understood to be preceded by the noun “feast” (thus, Feast of St. Felix); they are followed, as are all the saints’ names, by a biographical designation (also, of course, written in the genitive) – presb[ite]ri (priest) or abb[ot]is (abbot) – which was useful in telling the difference between saints with the same name. Some feasts commemorate historical events, such as the Circumcision of Christ (January 1) or the Epiphany (January 6), or events important to Church history, such as the Translation of the Relics of St. Mark (January 31), a feast commemorating the ninth-century installation of the evangelist’s bones in Venice’s basilica. Finally, some days are octaves, commemorations at the end of an eight-day celebration of important feasts that occurred a week earlier. Thus, near the top of the first column, we can find the Octave of St. Stephen (January 2; his feast occurred on December 26), the Octave of St. John the Evangelist (January 3; his feast occurred on December 27), and the Octave of the Holy Innocents (January 4; their feast occurred on December 28).

As was routine, most of the feasts throughout the year (such as the Octaves just mentioned and those of Sts. Felix and Maurus) are written in black or dark brown ink. Important feasts were often written in red (the origin of our phrase, “red-letter day”). The calendar of the Hours of Henry VIII, however, employs an element of luxury by writing the important feasts in alternating red and blue ink. 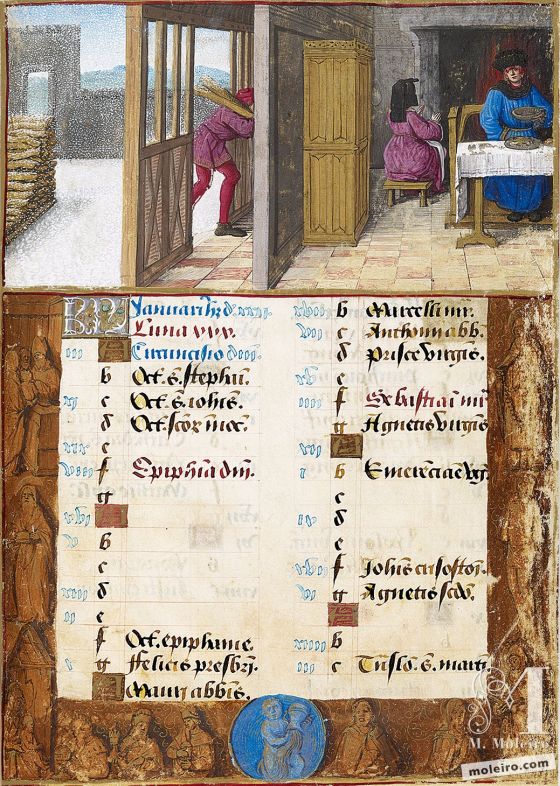 Adjacent to the two-line inscription is a large “KL” that stands for “Kalens,” the first of day of each month according to the ancient Roman calendrical system. This is the sole remnant of the Roman calendar in the Hours of Henry VIII, and it survives here solely as a decorative feature. The absence of the Roman calendar in this manuscript is a reflection of the changing ways of keeping time in Western Europe. As the Middle Ages gave way to the Renaissance, the Roman calendar was slowly abandoned; it disappears, as here, from the calendars in Books of Hours. Indeed, in some manuscripts produced a decade or two later than the Hours of Henry VIII, calendars will not only eliminate the Roman system but will also start numbering the days of the month with Arabic numerals, the system in use today.

As fascinating as the textual components of medieval calendars are, it is to the miniatures that the eye naturally wanders. When illustrated (which occurred in only about one in three manuscripts), Horae calendars were traditionally embellished with two vignettes in each month: the sign of the zodiac and the labor of the month (the activity, usually agrarian, commonly undertaken in the season). In the thirteenth, fourteenth, and most of the fifteenth centuries, these illustrations were small, often medallions. (The full-page calendar illustrations in the Très Riches Heures commissioned by Jean, duc de Berry, from the Limbourg brothers is a grand exception.) By the late fifteenth century, however, these secular illustrations of the labors assumed a larger role in the book, again, a reflection of the transition from the Middle Ages to the Renaissance.

The labors in the Hours of Henry VIII vertically fill nearly a half of each calendar page and, horizontally, span nearly the width of the page, unconfined to the dimensions of the text block below. This horizontal format offers a generous amount of space in which the seasonal activities take place. While the calendar of this manuscript includes the signs of the zodiac as traditional medallions at the bottom of each month, it offers something special in the borders. There, delicately drawn in gold upon monochrome panels of brown, purple, blue, or green, are depicted some of the saints whose feasts are listed for each month. These vignettes usually illustrate the more important feasts, that is those written in red or blue ink. 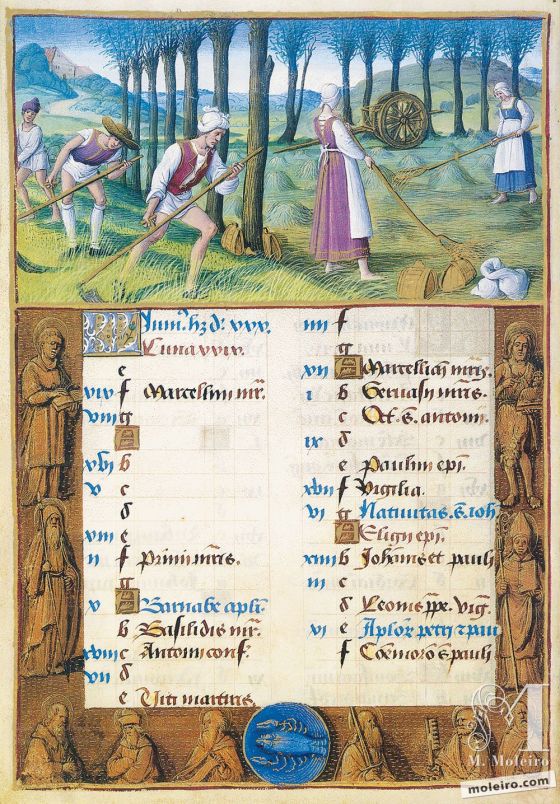 The hard labors of the summer begin in June with the mowing of the hay. At the left, three men rhythmically attack the field with large scythes. Two women rake the loose hay into stacks. Behind them, a wagon waits to be filled. In the foreground at the right are the workers’ bundles of food and casks of drink.

In the warm weather, the men wear less than their counterparts in the March miniature. Two wear their doublets with neither sleeves nor hose attached, and the third worker has dispensed with his doublet altogether. The women wear simple dresses with aprons.

The first saint in the left border is Marcellinus (June 2), who, along with the exorcist Peter, is one of the most prominent martyrs under Diocletian (both are mentioned in the Canon of the Mass). He is followed by Barnabas the Apostle, holding a lance (June 11, in blue), and three generic figures who may represent any of the six male saints listed after Barnabas: 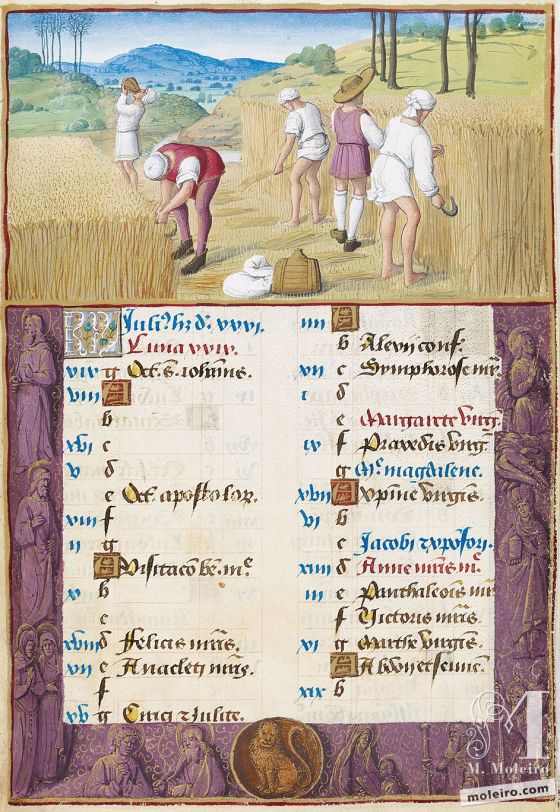 The Hours of Henry VIII, illuminated by Jean Poyer, c. 1500, The Morgan Library & Museum, New York
July: Reaping (folio 4)
The summer harvest continues in July with the reaping of the wheat. Four men, minimally dressed to keep cool, carefully cut the stalks with sickles and lay them in neat bundles. As in the June miniature, the foreground features, almost like a still life, their containers of food and drink. The warm gold color of the wheat combined with the light, yellowed green on the hill at the right suggests the heat of the July afternoon. Indeed, one of the workers pauses to take a drink!

The first two generic figures in the left border resemble apostles and probably illustrate the two octaves of John (July 1) and of Peter and Paul (July 6). Following them are Elizabeth, on the left in a turban, and the Virgin, in a veil (for the Feast of the Visitation, July 9). This pair is followed by two generic male saints. At the right is St. Margaret, shown emerging from the dragon (July 20, in red). She is followed by Sts. Mary Magdalene, wearing a tall turban and holding her ointment jar (July 22, in blue), Christopher, carrying Christ on his back, and James, as a pilgrim (theirs is a joint feast, July 25, in blue). The last saint is Anne, depicted instructing the Virgin (July 26, in red). In the calendar she is cited as “Anne mris me”; this is to be expanded as “Anne matris [not martyris] Marie” (Anne, mother of Mary).

This was an excerpt from The Hours of Henry VIII commentary volume of by Roger S. Wieck. Wieck is Curator and Department Head of Medieval and Renaissance Manuscripts at The Morgan Library and Museum, New York.