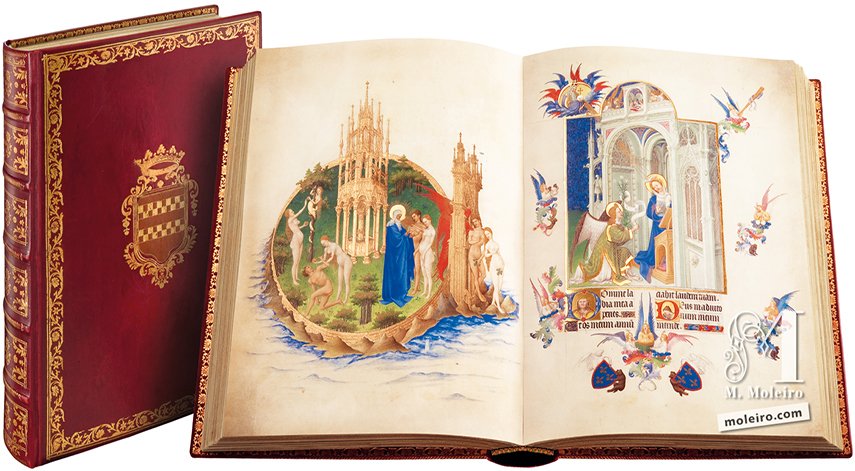 The Très Riches Heures, Bibliothèque du Château de Chantilly, France, is the most lavish manuscript commissioned by the wealthiest, late-medieval, French bibliophile and art lover: Jean, Duc de Berry (1340-1416), the son, brother and uncle of three kings of France: John II the Good, Charles V and  Charles VI. An extraordinary undertaking produced between 1413 and 1416 by the Limbourg brothers, Paul, Herman and Johan, undoubtedly the foremost miniaturists of that period, who were commissioned by Jean, Duc de Berry to make the most lavish book of hours of all time: the most highly-prized gem in his remarkable library.

The most extraordinary book by three leading artists was left unfinished.

The Très Riches Heures du Duc de Berry with its 130 miniatures embellished with gold and silver and more than 3000 gilded initials was a milestone in the late Gothic miniature and the greatest masterpiece by Herman, Paul and Johan Limbourg, the three brothers from Nijmegen who worked on the manuscript's decoration between 1413 and 1416, the year when they mysteriously disappeared, possibly because of the plague. Duc Charles of Savoy, depicted with his wife in the miniature of Christ suffering on folio 75r, commissioned Jean Colombe of France, another great master of the miniature, to resume the work which was completed in 1485. Certain authors hold that Barthélemy van Eyck also participated, in c. 1440 in the October and December miniatures in the calendar to be precise, and possibly in some details of the March, June and September illustrations too.

A marvellous amalgamation of man and nature in breathtakingly beautiful images

The Limbourgs' delightful miniatures, particularly those in the calendar, captivate and fascinate and draw beholders into a seemingly enchanted world. The three brothers' masterful chromatics, layouts and subtle observations on the pages of the Très Riches Heures bring to life the pastimes of the aristocracy and the toil of poor peasants, the striking beauty of the country landscape and the imposing presence of castles and walled cities, the lavish garb of the French upper class and the plain, modest dress of peasants. An imaginary yet realistic and tangible world that conveys a harmonious, peaceful balance between man, nature and a great variety of architectonic settings.

There is no ratings yet