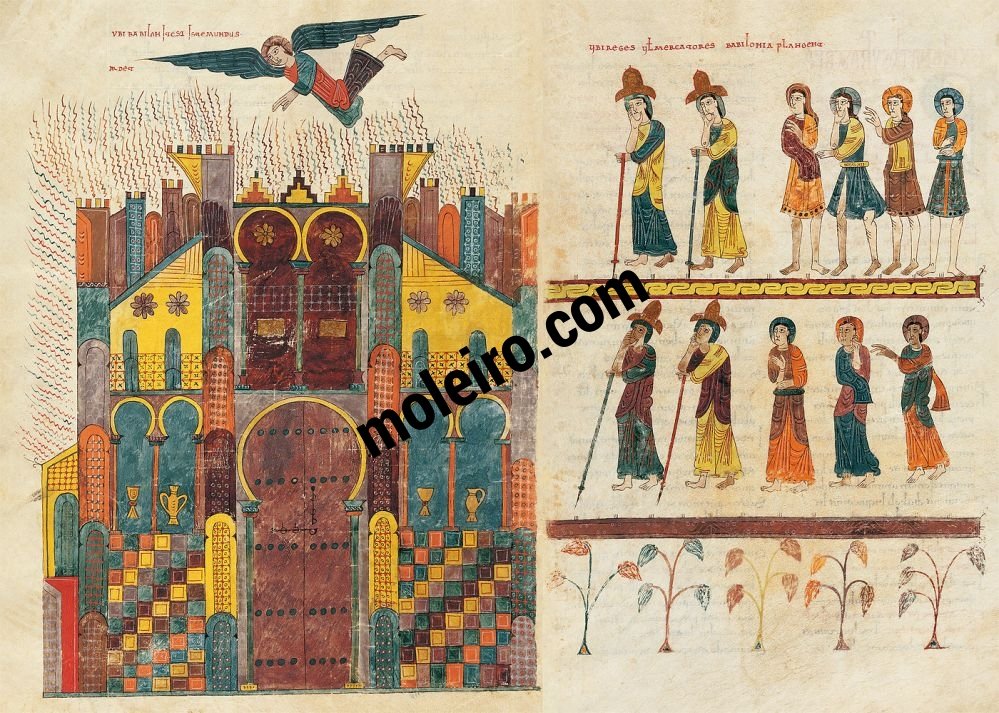 ff. 215v-216r, The fire of Babylon and the mourning of the kings and merchants

This illustration, as in most stemma II Beatus, covers two folios. Folio 215v, with the legend “vbi babilon it est iste mundus/ardet”, a paraphrase of the explanatio680, at the top, shows the angel flying and pointing in a discursive gesture at the city of Babylon represented as a walled city consisting of a large face with two sections and a gabled roof crowned by crenellations and flanked by large buttresses, full of fire – represented by wavy, red and blue lines – with a large opening in the form of a horseshoe arch containing a closed, wooden gate with iron rivets, surrounded mainly by two pairs of twin horseshoe arches with a rectangular frame. The jugs and cups that can be seen inside belong to a Visigothic tradition and symbolise its splendour or the holy goblets stolen by Nebuchadnezzar. Above this is a pair of mullioned horseshoe arches with a rectangular frame, each with a gold, star shape in the top part, which is repeated on the two adjacent, side areas, and a quadrangular shape, also gold, in the bottom part, to represent their wealth, all crowned by three Muslim-type, stepped merlons, several turret shapes and multicolour squares that could suggest tiles: all aimed at depicting the city in an architectural style typical of the Caliphate of Cordova – never in a pejorative sense but rather conveying the admiration it aroused in the kingdom of León. Folio 216r, with the legend “ubi reges u[e]l mercatores babilonia plangent” at the top of the page, depicts two rows of persons: the first two people in each row are shown with long garments, a large, eastern headdress and a staff of authority, and touching their chin with their hand in the usual gesture of suffering, hence these are the kings. The men following them make gestures of discourse and suffering, and beneath them are schematic and decorative representations of trees.

The earliest version of stemma I shows, in a synthesised manner, the selected events that are to appear subsequently in the other Beatus, covering the width of a column of text. The angel is over the city, represented by a series of arches, with a group of indistinct, lamenting men underneath. The most recent version, on the other hand, covers the same space but disregards the figuration of the city: the angel is situated at the top with the merchants underneath and, at the bottom, the kings. The image is depicted in more detail in the preliminary phase of stemma II for the destruction of the city of Babylon covers an entire folio, giving a more impressive result, with the weeping of the kings and merchants filling a column of text on the other page, a composition employed in branch IIa, in which the city and the lamenting merchants, as in the other stemma II codices, are shown in flames and with no frame. Furthermore, branch IIb copies are more monumental for they show the burning city on the verso of the folio and the lamentation covering the entire recto, where it is however framed unlike in the Gerona Beatus. In branch IIa, apart from the Morgan Beatus (f. 203r), which shows in this instance the earliest model of the prototype of this group, there are, as in the Vitr. 14-1 Beatus (f. 143v), two groups: the top one with the kings and their large headdresses, and the bottom group with the merchants, including one leaning upon a stick, which is to be repeated in all branch IIa manuscripts685, with all the traders depicted with their crook, whereas in IIb they are mixed and appear in two rows in front of the sovereigns, with the walking sticks transformed into staffs of authority or sceptres by mistake, with the merchants behind them, empty-handed.