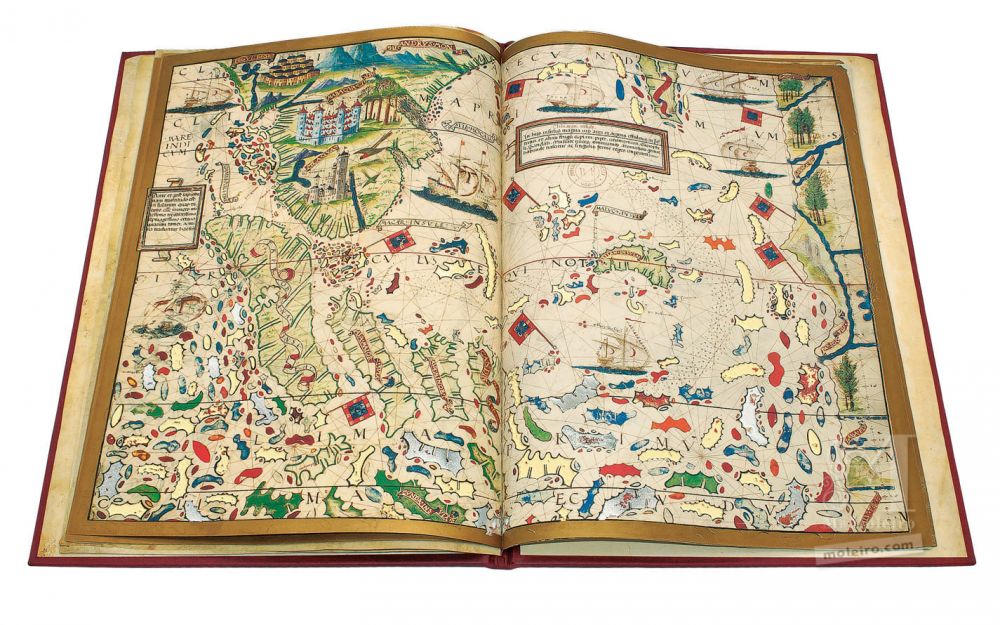 The entire western half of the Southeast Asian islands is chaotically portrayed as a vast labyrinth of islands, which may be a means of dissuading anybody for the Moluccas, as they would be lost behind an impenetrable maze of island and islets. A caption on the northern tip of Sumatra – here designated Taprobana Insula – is a verbatim reproduction from Ptolemy’s Geography: “Before and after Taprobana, there is a host of islands, that they say number one thousand, three hundred and seventy and eight: of which these are those that have names”.

The islands of Gamispolá, mentioned by Marco Polo, are shown north of Sumatra, continuing the line established by the Andaman and Nicobar Islands. Their name, which can be found both in the chronicles and in cartography, appears in minuscule letters and a large Latin caption in a banner, and the islands can be identified as a group of islands comprising Pulo Weh, Pulo Bras or Lampujang and Nasi Besar or Dedap, off the coast of Aceh (Acheh or Atjeh), from which they are separated by the Bengal channel (Lintasan Benggala, c. 5º 40' N, 95º 12' E). Although the name has apparently disappeared from modern use and the precise location is not known, the name is clearly of Malay origin, as shown by the polá ending (the Malay word pulau means “island”). It may have been a transcription of gamis pulau, literally meaning “the island’s shirt”, a reference to its appearance as some kind or external layer around Sumatra.

This followed by the large island of Sumatra, here called Taproban Insula. As mentioned, it is stretched too far south, since its southern tip – shown at 13° 45' rather than 4º S – is some 9¾ degrees south. As in the Cantino planisphere, Comatra (which should be Çomatra) is not the name of the island, but of a port: Samudera, located alongside Pasai (5º 10' N, 97º 12' E) and thus sometimes called Samudera-Pasai. This was the first state in the Southeast Asian islands to convert to Islam, in 1295. On Fra Mauro’s map, the two names appear as direct equivalents, as a caption explains, calling it “Isola Siamotra over Taprobana”.

Ultimately, this terminological confusion stems from the fact that Ceylon has several Sanskrit names: Tâmraparna or Tâmraparnî, Simhala, Ratnadvîpa (“island of jewels”), Lankâ or Srî Lankâ (“the prosperous Lanca”), etc., of which the latter are more literary. Evidently, the first – recorded since c. 247 B.C. in the second rock edict of Asoka, the first unifier of India – resulted in the Greco-Roman toponym Taprobana, which was used by Pliny and many other authors after Onesicritus, a companion and chronicler of Alexander the Great. The name seems to have disappeared from use in India during the middle of the 6th century AD, as each time that Cosmas Indicopleustes refers to the island, which he does several times, he carefully explains that what the Greeks called Taprobana, the Indians called Seladiva or Sieladiva. The last name is a loose transcription of Simhaladvîpa (island of Simhala), which led to the Latin form Serendivae (understood as insulae), used around 362 AD by Amianus Marcelinus. It also resulted in the Arab form Sarandîb, which commonly appears in mediaeval Islamic geographical texts after Ahbâr al-Çîn wa'l-Hind and Kitâb al-masâlik w'al-mamâlik (“book of itineraries and kingdoms”) by Ibn Khurradâdhbih, both of which date from c. 850 AD, were still used in the 14th century by Ibn Battuta and are mentioned in passing by João de Barros. The simple form Simhala – meaning something like “home of the lions”, which led to the lion becoming the symbol of Sri Lanka – also resulted in the Portuguese expression “chingala” (clearly taken from Tamil, which has no s phoneme and generally confuses the ss pronunciation in Sanskrit with the voiceless palatal fricative ch) and the more sophisticated “cingalês” (both meaning from Ceylon). The form Simhalana, originally an adjective before being transformed into a noun, is also the basis for the Chinese name Hsi-lan, the Arabic Saylân (and hence the Portuguese Ceilão) etc. Recorded in Arabic since the geography written by Yaqut in the early 13th century, this became the most common term of reference for the island in the Middle Ages, and was used by Marco Polo, Odoricus of Pordenone, Giovanni de Marignoli, Nicolo de’ Conti, etc. The difficulty in identifying classical writers’ Taprobana with Ceylon is not only the result of the difference in name, but also because those writers attributed the island with a size that was far greater size than its true dimensions. Onesicritus, the first Greek author known to mention Taprobana, states that it measured over 5,000 stadia (1,000 km); Strabo declares it to be “no less than Britannia”; the Periplus of the Erythraean Sea, written between 95 and 130 AD, states that the “island Palaesimundu, called by the ancients Taprobane (...), almost touches the opposite shore of Azania” (i.e., Western Africa); Pomponius Mela believes it to be part of a hidden continent, while Ptolemy had it straddling the equator, stretching from 12° 30' N to 2° 30' S, when it is actually located 9° 45' N and 5° 58' N. This detail led some authors erroneously to identify the Taprobana from classical writing with Sumatra, which is in fact crossed by the equator. Diogo do Couto blames this error on Poggio Bracciolini’s account of the voyage of Nicolo de’ Conti (1444), which formed the basis for Fra Mauro’s map from 1459. Couto was probably right, although the well known Catalan Atlas (1375) already shows Taprobana well to the east of India, and even east of Java, demonstrating that the tendency to locate it in the Southeast Asian islands started early. It is interesting to note that King Manuel seems to have been well informed from the very start, as his Letter to the Cardinal Protector, dated August 1499, notes “the island Taprobana, which they there call Ceylon, lies some one hundred and fifty leagues from Calicut (...); they say it is of a size not so big as is considered here”. Nonetheless, the confusion took some time to clear. Although João de Barros, Diogo do Couto and Manuel de Faria e Sousa, following António Galvão, correctly identified Taprobana as Ceylon, Damião de Góis agreed with Castanheda and identified it as Sumatra. The confusion also persisted in European drawn and printed cartography, even occasionally continuing through to the late 16th century, when the arrival of the Dutch and English in the Indian Ocean brought a preference for local place-names.