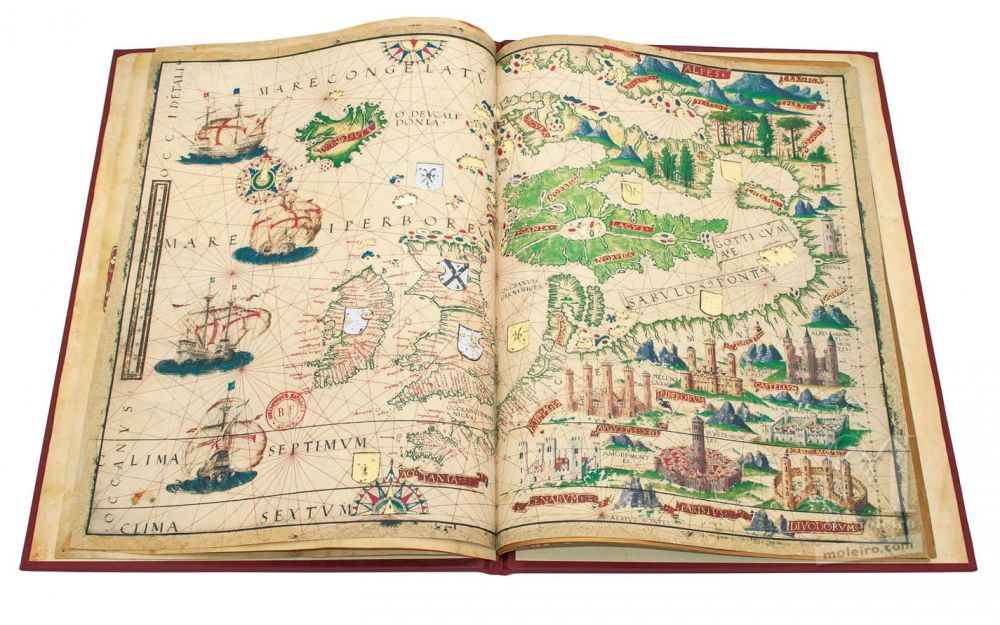 The map showing Northwest Europe covers the area from Britain and Ireland to the furthest reaches of the Baltic, and from the Iceland Sea to the border regions between France, Flanders and Germany. There are numerous illuminations depicting large cities in the latter areas, the homeland of the man whom I believe decorated this work of cartography. Curiously, they are always identified by their ancient Latin names, from the time of the Roman Empire, such as Divodorum (Metz), Borbeto Magus (Worms) or Castellum (Kassel), etc. To my mind, this reveals what I feel is a rather pretentious effort to appear “cultural” and “Renaissance”, and in fact ultimately becomes archaic.
The structure for this essentially decorative chart was based on the model of hydrographic charts, showing the usual system of sixteen rhumb lines whose centre is located between Scotland and a still crudely drawn image of Scandinavia. Its geographical outlines are seriously distorted, confirming that whoever drew the chart had very little available information. Given the number of illuminations depicting cities on the land, only the right half – over the sea – had any free room for decoration with three wind-roses. Although these are similar to all the others in this atlas, only one is complete, while the others (in the upper and lower borders) appear as halves. The scale and the meridian, with latitude graduations, are respectively located in the left and right borders, and the sixth and the seventh Ptolemaic parallels (climate circles) are also visible. France, Flanders and the British Isles all include a large number of place-names, but the same does not apply to the Baltic and Scandinavia, where they are effectively non-existent.
As in every other regional chart in the Atlas Miller, the largest captions, which record the regional geographical names, are written in Latin and painted in gold on red cartouches. The spelling of the place-names along the coastlines clearly indicates that they were the work of a Portuguese craftsman. In fact, it was clearly the same man who drew the geographical outlines, and definitely not the man who produced the illuminations in the general imagery and painted these larger captions.
Again, as in all the regional charts, there can be no doubt that one pair of hands was responsible for the geographical and nautical forms, including the written place-names on the coasts, and another for the entire artistic and iconographic decoration, including the red cartouches with regional names written in gold. This first pair of hands belonged to a Portuguese-speaking cartographer (or cartographers) that merely completed his or their allotted task; the second belonged to a man of greater artistic skill, a man who had greater cultural pretensions, or pretentiousness.
In contrast to the other charts in this atlas that have been described, this one of Northwest Europe has neither a main caption in Latin nor a text to provide a basic description of the contents. It can therefore be concluded that these regions were well enough known to make such identification unnecessary.
The heraldic iconography comprises nine shields in various regions of Northern Europe and the Baltic, and the naval imagery consists of four ships. Although the latter are sailing in the North Atlantic, they are all large Portuguese vessels whose sails bear the typical crosses of King Manuel’s Order of Christ. The detail included in these images makes them of exceptional value as sources for historians of shipbuilding. As already said, the urban iconography is very rich, even though the specific details shown for each of the nine cities evidently reveal a rich imagination. Curiously, besides the large cities in Northern France such as Parisius (Paris), Cenabum (Orleans) and Rotomagus (Rouen), some of the nine cities are of merely average size. This applies to the aforementioned cities of Metz, Worms and Kassel, as well as two more in the Baltic (Reval and Pevan) that are only symbolised by towers. Needless to say, since neither the producers nor the recipients of this work saw anything here as exotic, there is no iconography of the local people, flora or fauna.
In addition to this chart of Northwest Europe, the Atlas Miller includes another large regional chart: the chart of Europe and the Mediterranean, whose geographical scope is the same as that of the ancient “normal portolan charts” from the 13th and 14th centuries. This covers the area from the Atlantic off the Iberian Peninsula to the Middle East, and from the Islamic coastline of North Africa to the edges of Russia and Scandinavia. The numerous intersections created by the two systems of rhumb lines are not decorated with a single wind-rose, presumably the result of a deliberate decision to leave an empty space that could later be filled with the extraordinary profusion of other motifs – shields, cartouches, cities, men, etc. – found elsewhere in this atlas. Since it is very ostentatious for a work of cartography, this suggests that it was probably displayed and hung on a wall at some time, leading to a slight deterioration in its images.
Although there is no scale to be seen, there is a meridian with latitude graduations located slightly west of Portugal, in the Atlantic. Not only are there also several parallels with the seven climate circles (all positioned exactly in the latitudes defined by Ptolemy, as already noticed by several authors, such as Jean Denucé and Armando Cortesão), but there are also some meridians. These lines are obviously an attempt to create a longitude graduation, as is confirmed by a text on the large crimson bands that border the map to north and south. There is no question that after this “normal portolan chart” had been created along the lines defined by the compass, it underwent a cosmetic operation that tried to disguise it as a Ptolemaic map: yet another reason why this work is so unusual.