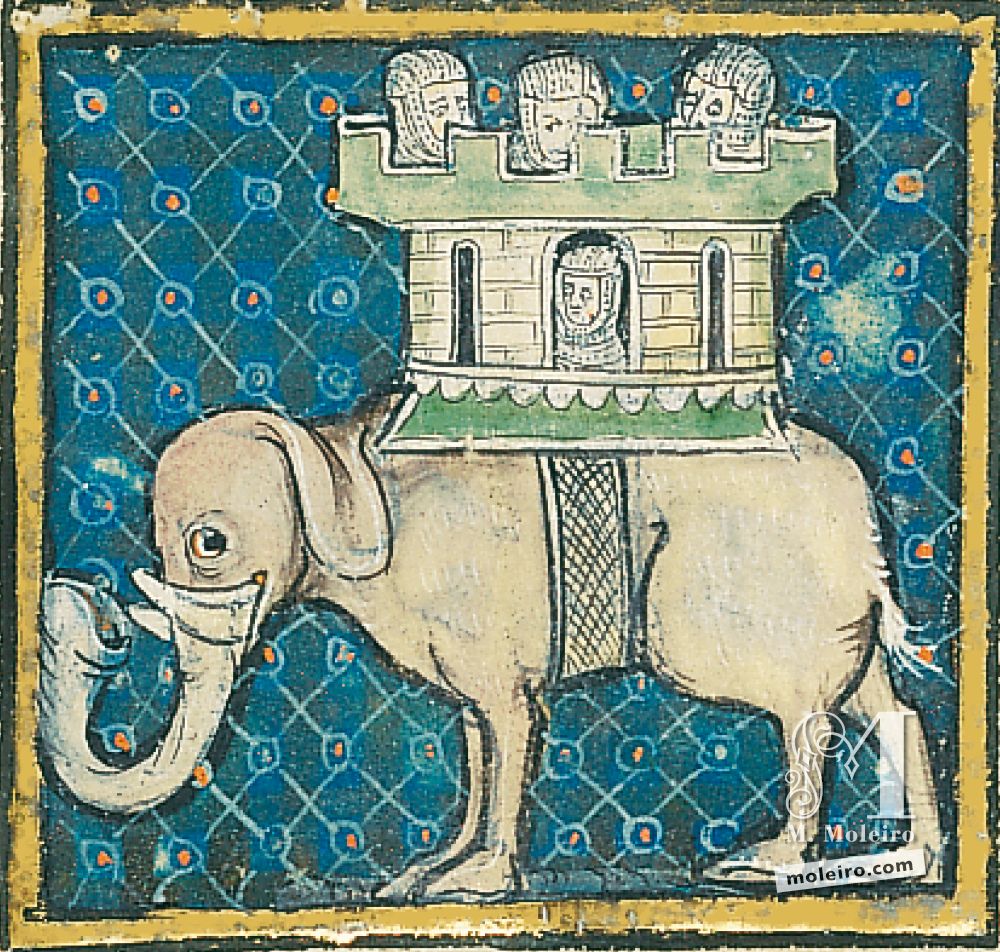 
The elephants are the biggest known animals on Earth. They have ivory tusks, and their muzzles, similar to a snake, receive the name of proboscis trunk. With this trunk, they put the fodder into their mouths; and this is why they have tusks. Moreover, they have such strength in their trunk that they break everything they hit with it.

The inhabitants of Cremona say the Emperor Federico II brought an elephant to Cremona that the Prester John from India had sent to him, and they saw the elephant hit a donkey with its trunk with such a strength that he throw the donkey into a house.

However, although they are very fierce, elephants are easily tamed when captured; but they would never get into a boat to cross the sea if their owner does not promise them that they will be brought back. You can mount them, and take them here and there, not with a brake but with an iron hook; and they are so strong that you can place wooden turrets and war machinery on top of them for combat. However, Alexander the Great had human copper figures built against them, full of burning coal that, when the elephants hit them, the figures burned and destroyed their trunks and, for fear of the fire, they did not approach them ever again.

Besides, they have great intelligence and memory, since they observe the sun and the moon as men do. They always move in large groups, by squads, from which the eldest is the captain of them all and the second is the one that guides and stimulates them. In combat, they only use one of their tusks and keep the other in case they need it; though they use them both if they feel they are going to be defeated.

The nature of the elephants is such that the female, before thirteen, and the male, before fifteen, ignore the meaning of lust; and, even then, they are as chaste that they never fight for a female. Each male has his own female, to whom he stays united forever in such a way that if he loses her, or she loses him, they never have a new partner and they just go alone through the deserts.

In addition, as they do not get lost in lust, the copulation is something that happens by nature. While they are both walking towards East close to the Heaven on Earth, the female finds an herb called mandrake and, after biting it, she feeds the male with it. In that exact moment, they unite to conceive and, some months later, they give birth to a baby elephant, only once in their life, and yet they live almost 300 years.

When the right moment for labor arrives, the female gets into a lake and the male looks after her while she gives birth, as they are afraid of dragons. The dragons, which are the enemies of the elephants, want their blood, because it is not only extremely large in amount, but also the coldest blood in the world.

Those who have seen it say that the nature of the elephant is such that if an elephant fells to the ground he is not capable to stand up because he does not have joints in his knees. However, Mother Nature, which is the wise master of all animals, teaches them to cry out for help and to make as much noise that all the elephants on earth will hear them. At least 12 elephants would come to rescue the fallen elephant, and they would all shout together until a very small elephant arrives and put his mouth under him to lift him up.

Translation of the original text by Brunetto Lattini in the Bestiary of the Book of Treasures (ca.1230-1294)
Preserved in the National Library of Russia, Saint Petersburg